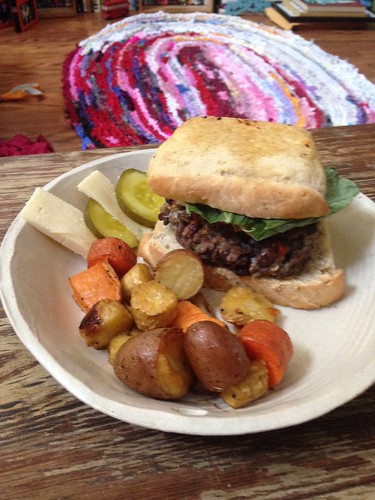 It’s Blake’s ultimate plan to go completely vegan at some point in the future.

Food politics aside–although we both see reason in a variety of aspects of why to not eat animal products in terms of cruelty, sustainability, and so on–it is important for him to watch his animal fat intake due to a history of heart problems in his family. Strong, healthy, and fit Sanders men have incredibly low levels of good cholesterol, leading to heart attacks.

This past semester while we lived apart, Blake ate vegan at home and enjoyed it. I’ve been on the whole primal/paleo diet for a couple of years now–not strictly, but in general. And, as you know, that’s not anywhere close to vegan. There are lots of veggies involved, but also meat and animal products and their related fats. I lost about 20lbs and had more energy, and I quit getting terrible gastrointestinal pains in the middle of the night.

Ever since the beginning of the first trimester of this pregnancy, however, I delved back into the land of wheat out of necessity. I was living alone, working fulltime, and feeling sick quite often. I had to keep crackers by my bed and eat a few before I could get up in the morning. And some days all I felt I could keep down was plain, white rice. When food/cooking smells turn you off, but eating a little something is the only thing that keeps you from hurling, pre-made and bland crackers and quick things like rice and pasta are a good solution.

At the same time, meat isn’t appealing to me as much most of the time. Yeah, 2nd trimester I’ve definitely wanted some burgers, bacon, chicken breast, and so on. But if I’m cooking, I’m weirdly a bit disgusted by the raw bits and carcases in a way that’s never bothered me before. It’s happening less now than in the 1st trimester, but the feeling is still there.

Blake and I read that this is likely related to some evolutionary adaptation–an aversion to foods which are most likely to be contaminated with bacteria and other toxins potentially harmful to the fetus.

I haven’t jumped back into wheat life full on. However, as a convenient transition, I decided that upon shopping to stock up for our first weeks in our new apartment, why not start out vegetarian and see how it goes? I want to eat as many different types of food as possible during this pregnancy to ward off picky tastes and, more importantly, food allergies.

So far this week, we’ve eaten a variety of meals based mostly on simple combinations of vegetables, 3 types of beans, jasmine rice, cheese, eggs, and home baked sourdough bread.

The bean mixture of choice, to use up an old stock, combined equal parts of black beans, black eyed peas, and red beans. They have been delicious in a 7 layer dip with guacamole, a bean dip “hummus” with tahini and, last night, a remake of my black bean burgers recipe.

By request, I’m sharing this last recipe with you here. It’s a slight modification of a “black bean burgers” recipe I found online a few years ago. It’s easy, and you can make it up ahead of time and freeze for long term storage before cooking. Later this week, we’ll be using some of the mixture instead of ground beef in a modified tater tot casserole. 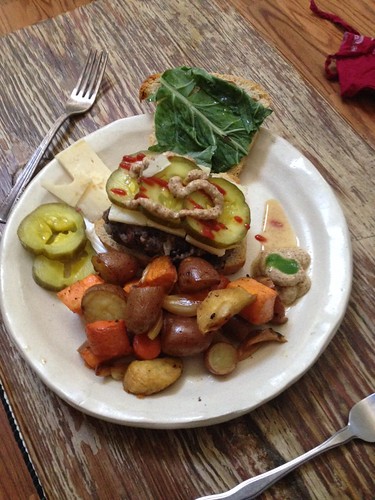 Top them with your faves! We used Sriracha, spicy brown mustard, pickles, a fresh collard leaf, and sharp white cheddar and served them on some of my homemade sourdough bread. 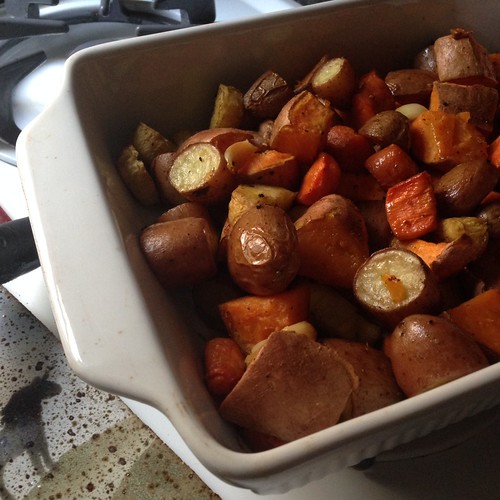 We served them with a side of roasted vegetables, which are super easy to make. Just chop up your choice similar vegetables into similar sizes, toss in 1 tbsp olive oil and 1 tbsp coconut oil, salt and pepper and bake in a single layer in a 350 degree oven for 20 mins covered with tinfoil, and 20 minutes without tinfoil until they are desired softness with a bit of a crispy skin.

We chose a mixture of garlic (leave the skin on while baking then remove skins easily after they cool a bit before eating,) and skin-on parsnips, carrots, sweet potatoes and red fingerling potatoes.

Baby Update: Baby doesn’t like heavy base in Monkey Movies.